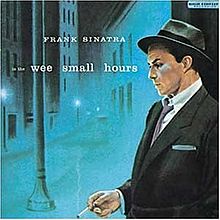 I have never been much of a Sinatra fan, although I have always admired his voice. I’m sure most people have heard of him or heard him before so let’s not go into any of that. This album, In the Wee Small Hours (1955) is, and I think would be, enjoyable to hear. It’s smooth and has a touch of class, just like the mythos of Sinatra. Like I’ve mentioned before I am not involved in music in any way, therefore nothing I am about to say will sound technical. With that out of the way, there is a great overall mood to this album. The article written in the 1001 Albums… mentions that this was Sinatra’s come back. People thought he was done however, with this collection, Frank became big time again. The mood adds to that come back. It is a sensual Sinatra that I feel is missing from a lot of the popular songs of his that I have heard. With the opening track, “In the Wee Small Hours of the Morning,” there is a longing that is evident in elongated syllables he belts out with tact. Actually, there is a lot of longing in this album. In “Last Night When We Were Young,” it feels like Sinatra is reminiscing about his previous heyday, even though he sings about a woman. The song starts off nice and slow, like most of the songs on this album, but builds up at certain parts to emphasis what was there. The main feeling I get from hearing In the Wee Small Hours is that Sinatra is singing because he can, not for any other motive. It does not feel like he is trying to make a comeback, but enjoying the chance that was given to him. According to the book, this album did bring him back into the spotlight. He rejuvenated his career with these tunes. One of the more playful songs, to me, is “Can’t We Be Friends?”, which is ironic because it is about him being rejected. Rather than keeping with the somber mood of the majority of the songs on this album, this song has a nice, slightly more uptempo piano accompanying Sinatra’s usual spot-on tone. All in all, I would say I am pleasantly surprised with this album. I would definitely listen to it again, which I am doing now. 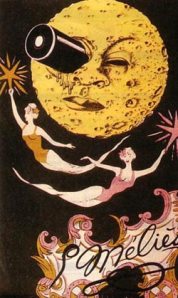 The first thing that I need to say about this film is ‘wow.’ Only 14 minutes long, Le Voyage dans la Lune (Melies 1902) is highly enthralling. Keep in mind that this film was made in 1902 and the special effects are astonishing. During the time when film is just being discovered, Melies is already playing with camera tricks, dissolves, cuts, and it’s all a story. There were not a lot of fictional films in the beginning of cinema. If I’m not mistaken, early cinema was just real life on camera, like the Lumiere Brothers and their shot of a train coming into a station. The settings are awesome, even by today’s standards I’d say. The sets are obviously fabrications, part interactive and part painted backdrop, however, there are times when they seamlessly flow together. There is a scene in which the “wizards” are standing on a balcony in front of an industrial complex. There is smoke coming out of the stacks, and if you look close enough, they have rigged real flowing water. The fact that these effects were accomplished all through construction is mind-blowing. The storyline itself is fun. Scientists, or “wizards” by the look of them, decide to travel to the moon. They shoot a bullet straight into the eye of the man on the moon. Once there, they encounter moon-people, and finally drop off of the moon into the earth’s ocean. The version I watched is a recently restored edition that comes in a combo pack with Air’s soundtrack inspired by this film. Although the album itself is great, I disliked pieces of it played on top of the film. This film is a masterwork of visuals, and originally it was in black and white with hand painted frames to add color. Le Voyage dans la Lune is all about the look, and it does not disappoint. Find it, watch it.

Next week: D.W. Griffith – The Birth of a Nation (yikes…)

Hello all, this is the first post where I reveal why I started this blog, right. Sure. I got bored, simple, and I happen to like movies and music (shocker). So one day I thought, hey why not talk about them. There are plenty of forums among the cats in the tubes to do this, but I want my own. I am not a film or music student/major nor do I work in any field related to either, but who cares. So, feel free to read my unpolished thoughts on each category as I attempt to post about one movie and one album, once a week (maybe more). I am basing this on two books, mainly. Both part of the same series, I will be using the lists provided by 1001 Movies You Must See Before You Die (Link) and 1001 Albums You Must Hear Before You Die (Another Link). I am just going to go through the lists of each book and discuss each movie or album here. I will also try to end each post with the name of the next film and album I will be watching or listening to, respectively. Thanks for dropping by. Oh, and in case you’re wondering, one film and one album a week for 1001 weeks will take almost 20 years. “Never give up, never surrender.”